To those who remember Cinderella Sister aka Cinderella Unni drama this year ... Moon Geun Young and Chun Jung Myung. This is the song from that drama, by a duo called December - Tears In Heaven. Now, I kinda miss that blunt young character of hers, instead of the current one. A very moving, and warm ballad. ;)
Posted by Panda um 2:29:00 AM 1 comment: 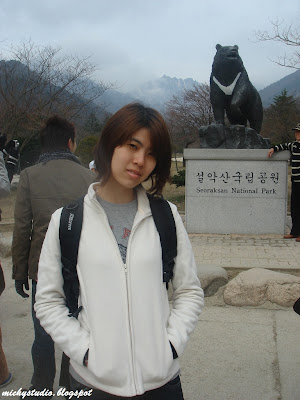 Welcome to Soraksan National Park. Those who are not used to wearing high heels, please do not wear it here, as you need to walk a lot, not on flat routes, but on rough path, for, you need to climb up hill unless you decide to stay at the bottom, whereby you can't enjoy the scenery at the top. Next question will be, why are you even there if you don't intend to go to the top, or at least the middle? I found my relative here - a bear!!! OMO!! Om! I saw Om! We are one family! hehe 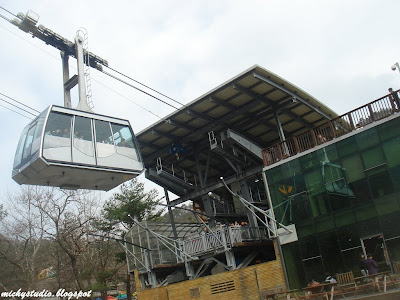 In order for you to start climbing, you first need to take the cable car. As you go along, the river and the scenery is really nice. 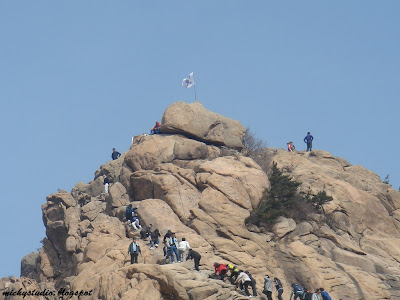 Unless you are used to it, do not go up til the top. It's very very steep. These people who go up, they need to come down with their ass sitting on the rock, slowly, and slowly ... to come down. They can't even walk down. It's so steep and there's nothing you can hold on to. Once you fall, good luck. Look at the pic, even with going up, just see their posture. 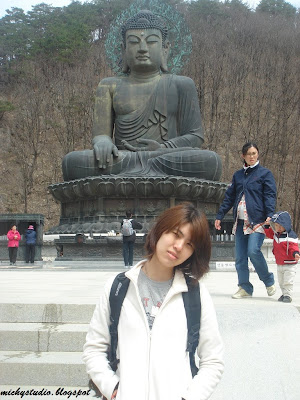 Oh ... maybe because of this I became a Goddess - a Goddess is someone who can withstand not eating and sleeping HAHAHA. That's my perfect definition :P 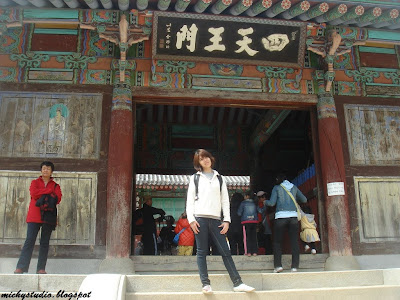 It might be glaring until my eyes could not open. Not that even in normal sunlight I can open my eyes as big as I wish to. I just have small eyes, don't blame me. But, the weather was actually quite cold. What I really miss during cold weather is .... to have ICE-CREAM! My gawd!! That feeling is awesome! It makes you shiver down your spine haha. According to them, this place where people pray, is quite accurate. Well, I don't know, not that I'm a great follower of any religion. It's just recently I found my true religion - in JYJ. Those who are not familiar, do not ask me what is that. It's a religion that's all I can tell haha.
Posted by Panda um 12:07:00 AM 10 comments:

Today, is Thanksgiving Day. We should be thankful with what we have.

Make it a habit. Today, stop complaining and ranting about things. At least for today. Don't complain that you have not enough money though you have tons of them, that you don't have a bf, you don't have a gf, or your gf this, your bf that, or the drivers on the road are mentals and psychos, or that your this did that, your that did that. Shh. Say thank you instead.

It's a good start, a positive start to being a positive person. Be thankful instead that you are here, to enjoy the beautiful life, to treasure how wonderful and how lucky you are to be here, right here, at this moment and this is priceless. You might not be the richest, might not be the best, but everything you have now, tangible and intangible, is not things that some people can even dream of.

Please allow me to say this, that some people really have an ugly flower vase brain. I'm sorry to say, but, he proved himself well enough that is now certified. Flower vase = empty in the inside.

Again, the moment I met him for the first time, not knowing anything about him, obviously I trust my instincts at that moment of time. He's a friend of a friend, who got to know from other friends as well. Though I have been told that he's actually an okay person, I trust my feelings more. It's not that I don't trust my friends, but, everyone's perception on people differ from one to another. It is also a fact that people are usually caught between your own judgement and people's perception towards him who obviously know him more than you do. No matter how much they know him, I still prefer to trust the feeling at that moment of time.

It turned out to be, he really isn't like how he was described as. Looking at him, I know, he's definitely not someone you can trust with. See, he's actually a someone to my friend. Though I did not say anything, my friend knew I was not too keen on him, that I don't like him like how she wish I could. Hence, she kept a lot of their problems from me, to avoid any hatred that bound to happen if I were to know about how was he treating my friend.

Recently, he got to know my friend went out to partay~ Well, what's wrong with adults going to partay you may ask. Nothing's wrong for any of us, only him. They are over with each other, gone were the days. It's all just in the history. My friends are all nice people, they are people who will give second chance to boys, guys, and whatever you call them as. This, will be no different. My gut feelings told me otherwise. He will not change. I warned her, but, as long as she's happy I'm cool. It's normal for people to dance in club, no? What's a club for? To sit around look at people and look oh-so-boring? That's so pathetic, and I think that's more for him, and not others. He got to know that she was dancing with a guy friend and he commented something very ruthlessly. He's no longer in her life, everything was in the past. What is wrong with doing so>? He does not have any effing right to comment anything about the way she parties.

He was saying, that she is such an easy girl. Oh, and just FYI, he did not see how she danced with that dude in his own eyes. Someone else told him. Hence, of him commenting such thoughtlessness remarks.

First of all, he was someone from her past and whatever she does now, has got nothing to do with someone like him. Since he is so judgmental of people, why does not he see a problem in himself? Take a mirror, and look. It's full of problems, from head to toe, even the one inside his head. If only he see the never-ending flaws he has, he should just shut his big mouth and go on with life. You know what? It's not gonna be a chance for you anymore, and no matter what, this time, I can assure that. I will not let it happen babeh. You know why? Coz you are such an undeserving idiot. Yeah, go on commenting, go on bitching, you will not go far in life. Remember this, the problem is YOU. Just continue being a loser. If you think you are so great, well, just continue living in denial because you are so far from that. I can see at least something good in people, even though I might not that keen on them, except you, I wonder why? Please sit around more to talk even more, and you can join Asia's Biggest Loser the next season. Good Luck yo. haha.
Posted by Panda um 3:51:00 AM No comments:

Today marks the 2nd year since her passing.

All of us miss you a lot, hoping that you are happier, and most important, free from torments, injections, pain, and worries.

She is someone that one can hardly forget, the small little sized girl, with a heart of a gold, and face of an Angel. She, who had touched so many people's heart. She, who had taught the true meaning of life to so many people. When all of us complain about our daily life, whether we do not have enough money to spend, that someone irritates you, or just you don't have enough time to party, she is just seeking and hoping that the next day, she is able to wake up, alive. It's that simple for her. For that, she is happy enough, she is satisfied, even though she needs to go one whole lot of pain every single day. Her will and determination to live is stronger than 10 people combined.

Thank you for coming into our life

Driving on the road is just getting more and more irritating. If I have an option to either drive to work and LRT, I will opt for the LRT just anytime. It's not practical when the LRT is located half an hour from my house. And, KTM is not that nearby either, it's not walking distance. And, to get a parking space in the station is almost impossible. Plus, KTM does not go straight to my working place, I need to change numerous public transport. I foresee if I were to take it, by the time I reach office, I would be tired as hell.

I really hope and wish that people can just be not annoying. Yes, annoying. Not because they put the Boom Boom music, or they did not put the indicator, or that they speed, or they cut queue. Obviously, all those are also factors, but without them showing all these is enough to piss someone off already. It's the main one.

People, can you just don't BLIND others by putting all those stupid screwed up lights, stop being a specimen on the road

You're happy I know. Can you be more considerate on others? Will you even like it if I blind you? Don't you feel irritated? Then stop all those shit. I really hope til the end of my life that these people get their license hang and to jail RIGHT AWAY. It's a crime to the very core, because they harm others on the road. Some people have more serious problem when they look at lights THAT blinding. It can cause accident, and some accidents started from there. It's brighter so what?? It doesn't give you any right to use that kind of stupid lights. Others are using normal lights, why can't YOU? And yes, I don't care how Ahbengfied are you, irregardlessssss.
Posted by Panda um 3:04:00 AM 8 comments:

I don't like it. It's gonna be back to that same old boring life again. Boring. Yet, another week. How interesting can it be. Shiroyo.

Well, this has been going on for the past 7 months, and this is only Part 4. I am a big time procrastinator when it comes to updating. I have a busy life. Busy working, drinking, gym, dance, eat, sleep, and dramas. Haha. =p 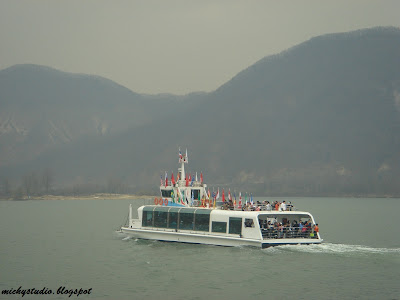 We gotta take this ferry over to the island. Welcome to Nami Island 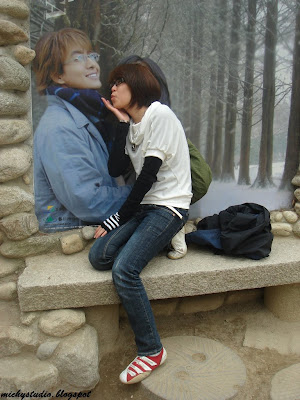 Tadaaa isn't this familiar. Oh yea .. this was the first ever Korean drama, or so it seems to make Korea famous. Ever since its release, other dramas went along, until today. It's the Korean wave for so many years, and it's getting bigger and bigger. Here was where Winter Sonata was filmed. 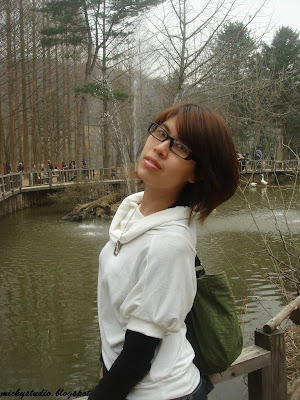 If it was winter, it will be very much nicer when it's covered with snow 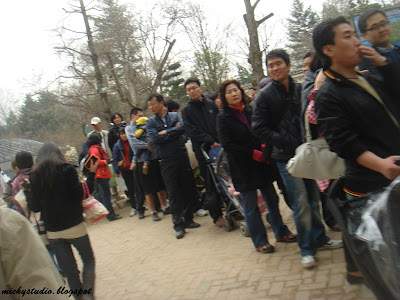 What a nice sight, all fit people around, tall and thin, I like! Choahaeyo! The queue were so long, all were lining up to get back on the land 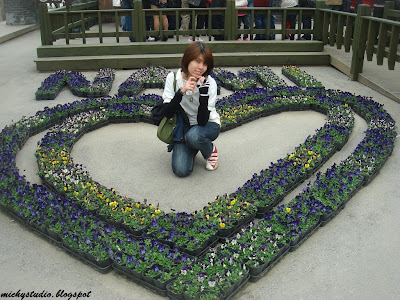 To all Indians, and to anyone else celebrating this festive season, Happy Diwali to all!

Be united, to celebrate this season.
Posted by Panda um 2:34:00 AM No comments: